Rihanna has 21 known tattoos all over her body – from head to ankles. She even has created a tattoo by her own – including a small umbrella on her tattooist's arm. She has started her romance with ink in 2006 when her first music note was created. Her latest add to the tattoos collection is a tattoo that wrote in reverse so she can read it in the mirror. It says "Never a failure, always a lesson" tattooed across her upper right chest –in light gray ink. She said, "It’s kind of my motto in life for everything."

"I like hanging out in tattoo shops", Rihanna has explained. "I am so intrigued by tattoos. It’s an entire culture, and I study it. Sometimes I go with friends, or just by myself. I get bum-rushed, but I don’t care. I don’t take security."

The best known tattoo artist that has created her tattoos is Bang Bang. He’s the most amazing artist of her most recent tattoos including hennas, guns and the famous "shhh" on her forefinger.

Music notes on her right ankle[]

This appears to be Rihanna’s first tattoo. She got it around somewhere in 2006. It was obviously inspired by her fresh music career. Rihanna has once explained that music is in her D.N.A. Now everyone can easily notice that music tunes are on her foot as well.

It was done by a famous Brazilian artist who books three years in advance. Luckily for Rihanna he was in Tokyo at the same time when Rihanna was so he could create it for her immediately.

A Sanskrit prayer going down her hip towards her butt[]

Bang Bang wanted to have a Sanskrit prayer going down her right hip that was saying “Forgiveness, Honesty, Suppression and Control”. Unfortunately it was misspelled.

A star in her left ear[]

The star was created at The Village in NYC. She has just stopped by the parlor and asked for a tattoo.

An Arabic phrase on her ribcage area[]

An Arabic phrase on her ribcage area and wrote Al Hurria fi Al Maseeh it translates to Freedom is God.

A trail of stars going down her back[]

A cute skull with a pink hairbow[]

The tattoo appears on her left ankle and it was done durning her stay in Miami, but her only tattoo with colored ink.

The word "Love" on her left middle finger[]

She got it in Los Angeles from one of the artists she used before.

The "Shhh..." phrase on her right index finger[]

This one is the most copied of her tattoos. It was recently copied by Lindsay Lohan and Lily Allen. Many fans have also decided to get one exactly like Rihanna’s.

Rihanna decided to tattoo the date of birth of her best friend Melissa on her left shoulder. Melissa did the same tattoo of Rihanna's birthday right after. 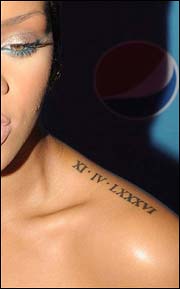 Rihanna revealed that she got the exotic-looking tattoo while in New Zealand during her tour. "It’s their traditional way of tattooing", she said of the Maori-inspired geometric design. "I always wanted [one]". "It represents strength and love". But even for a tattoo enthusiast like Rihanna, this particular method had one big drawback: "It hurts like hell!"

A handgun on her right side of her breast[]

During her LA getaway in 2009, Rihanna flew her tattooist Bang Bang from NYC to her home in the Hills. She decided to give a tattoo as a birthday gift to her friend. And at the same time she decided to get one for herself. Rihanna also once had a temporary gun tattoo on her right leg.

The motto in mirrored writing[]

Rihanna call on East Side Ink at 2 AM at the morning to have her own personal motto "Never a failure, always a lesson" tattooed backwards near her right shoulder. That way she can read it in the mirror.

"I asked her why she wanted that and she said, ‘It’s kind of my motto in life for everything.’ Instead of considering things to be mistakes, considering them lessons." "She said that she wanted to do it in gray, rather than black, because she wanted it to be more subtle," explains Bang Bang. "She didn’t want it to draw too much attention."
Rihanna said, " i had it done backwards so i can read it everyday in the mirror."

It means rebel flower in French and it was tattooed on her neck. Unfortunately it was mispelled. In French, adjectives typically follow the nouns they modify. To translate as "rebel flower", which we assume is what she intended, that tattoo should wrote "fleur rebelle."

Isis on her stomach[]

Rihanna got this tattoo shortly after her grandmother passed away from cancer. After posting the photo on Instagram she wrote: "Goddess Isis - Complete Woman - Model for future generations - #GRANGRANDOLLY - always in and on my heart #1love" 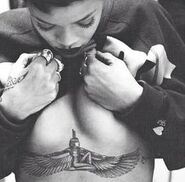 Henna on her right wrist[]

The tattoo was done during Rihanna's break from the Diamonds World Tour. Bang Bang explained the process lasted eleven hours and that it was his most challenging tattoo he's done on her, since they had to combine it with the tribal sign. 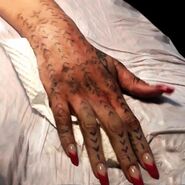 Falcon on her right ankle[]

The tattoo was inspired by the 2,300-year-old Egyptian falcon on display at the Metropolitan Museum of Art in New York City, but covered her music notes tattoo. 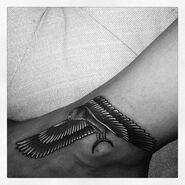 Rihanna added new ink to her collection in August 2015. This time she gets the year "1988" tattooed on her right ankle at the Bang Bang Tattoo Parlor in NYC. Rihanna was born on February 20, 1988.

Community content is available under CC-BY-SA unless otherwise noted.
Advertisement